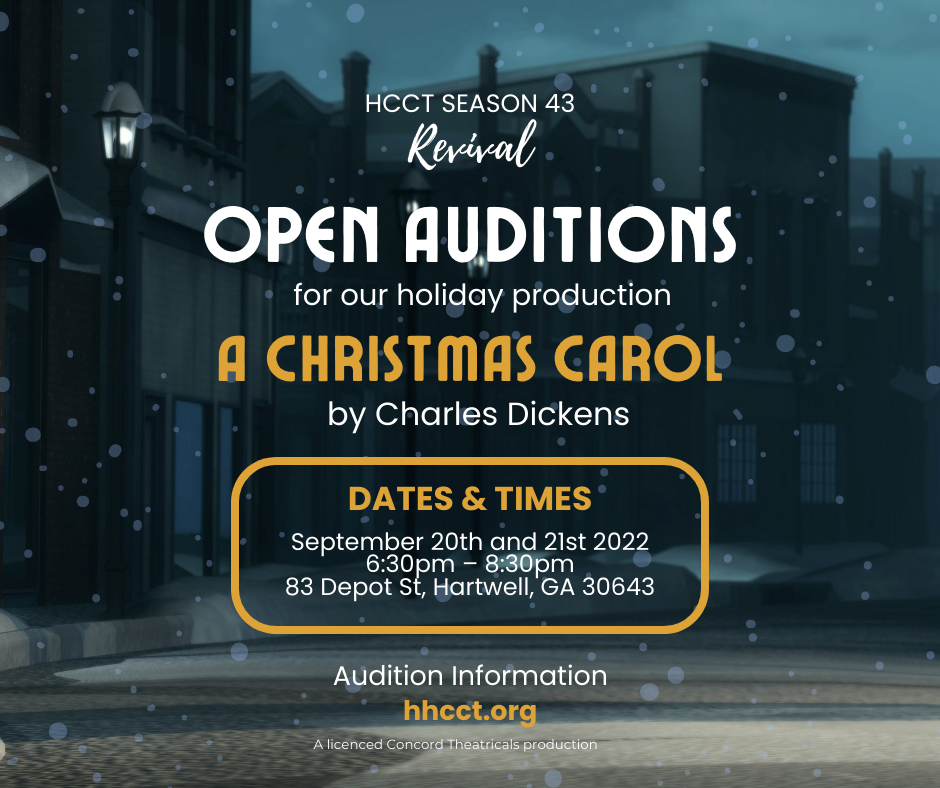 Auditions for A Christmas Carol

HCCT is seeking performers for its upcoming production of A Christmas Carol by Charles Dickens, an adaption by John Mortimer through Concord Theatricals and directed by Jeffery Hearn.

Prepared one minute monologue is STRONGLY preferred but not required, there will be excerpts ready for Cold Read auditions.

Any questions, comments or concerns to can be addressed to production [at] hhcct.org or for by using the contact form on our website.

We are actively seeking crew members for this production – please see this page for more information!

With few exceptions, most of the roles can be played as either male or female and will be cast accordingly. Role ages are fairly open for those who may portray older characters. There are many other Ensemble roles available for a multitude of ages.

The following descriptions are for the main speaking roles:

Ebenezer Scrooge – The miserly owner of a London counting-house, a nineteenth century term for an accountant’s office. The three spirits of Christmas visit the stodgy bean-counter in hopes of reversing Scrooge’s greedy, cold-hearted approach to life.

Bob Cratchit – Scrooge’s clerk, a kind, mild, and very poor man with a large family. Though treated harshly by his boss, Cratchit remains a humble and dedicated employee.

Tiny Tim – Bob Cratchit’s young son, crippled from birth. Tiny Tim is a highly sentimentalized character who Dickens uses to highlight the tribulations of England’s poor and to elicit sympathy from his middle and upper class readership.

Jacob Marley – In the living world, Ebenezer Scrooge’s equally greedy partner. Marley died seven years before the narrative opens. He appears to Scrooge as a ghost condemned to wander the world bound in heavy chains. Marley hopes to save his old partner from suffering a similar fate.

The Ghost of Christmas Past – The first spirit to visit Scrooge, a curiously childlike apparition with a glowing head. He takes Scrooge on a tour of Christmases in his past. The spirit uses a cap to dampen the light emanating from his head.

The Ghost of Christmas Present – The second spirit to visit Scrooge, a majestic giant clad in a green robe. His lifespan is restricted to Christmas Day. He escorts Scrooge on a tour of his contemporaries’ Holiday celebrations.

The Ghost of Christmas Yet to Come – The third and final spirit to visit Scrooge, a silent phantom clad in a hooded black robe. He presents Scrooge with an ominous view of his lonely death.

Fred – Scrooge’s nephew, a genial man who loves Christmas. He invites Scrooge to his Christmas party each and every year, only to be refused by his grumpy uncle.

Fezziwig – The jovial merchant with whom the young Scrooge apprenticed. Fezziwig was renowned for his wonderful Christmas parties.

Belle – A beautiful woman who Scrooge loved deeply when he was a young man. Belle broke off their engagement after Scrooge became consumed with greed and the lust for wealth. She later married another man.

Martha Cratchit – Bob’s oldest daughter, who works in a milliner’s shop. (A milliner is a person who designs, produces, and sells hats.)

Fan – Scrooge’s sister; Fred’s mother. In Scrooge’s vision of Christmases past, he remembers Fan picking him up from school and walking him home.

The Portly Gentlemen – Two gentlemen who visit Scrooge at the beginning of the tale seeking charitable contributions. Scrooge promptly throws them out of his office. Upon meeting one of them on the street after his visitations, he promises to make lavish donations to help the poor.