And Then There Were None – Audition Information 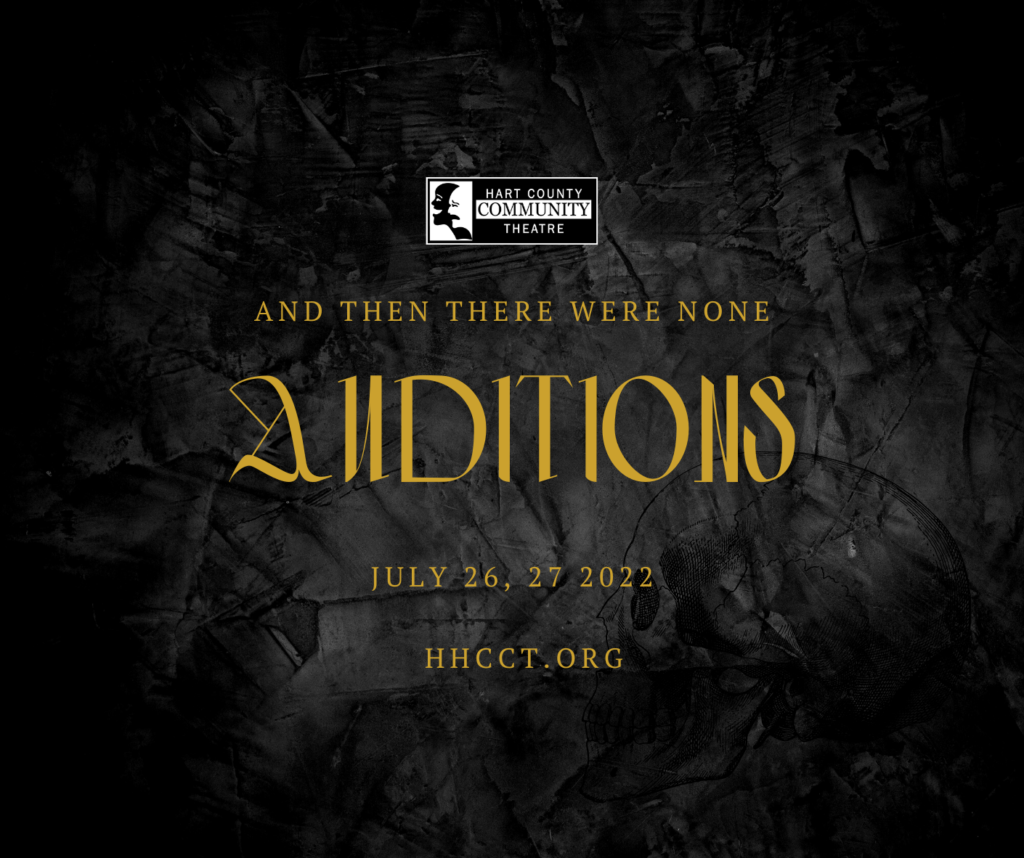 Auditions for And Then There Were None

Prepared one minute monologue is STRONGLY preferred but not required, there will be excerpts ready for Cold Read auditions.

Any questions, comments or concerns to be addressed to ATTWN [at] hhcct.org

And Then There Were None Character Breakdown:

Tentatively all characters speak with British accents, mostly upper class unless specified otherwise. With few exceptions, most of the roles can be played as either male or female and will be cast accordingly. Role ages are fairly open for those who may portray older characters.

Lawrence Wargrave (Male/Female) 30s to Early 60s
Wargrave is highly intelligent with a commanding personality. Wargrave’s experience and air of authority make them a natural leader for the group. A strong sense of justice.

Rogers (Male) 30s to 60s
The dignified butler. Rogers continues to be a proper servant. He always brings the drinks and food on time and is always polite and deferential, even in times of distress.

Mrs. Rogers (Female) 30s to 60s
Rogers’s wife and cook/housekeeper for the house. Ethel is a frail woman, she is frantic and anxious. She is married to Thomas.

Vera Claythorne (Female) 18 to Early 30s
Serves as a secretary to Mrs. Owen. Vera is intelligent and capable, but she also suffers from attacks of hysteria and reacts nervously to the uncanny events on the island.Very Practical and careful but also a romantic.

Philip Lombard (Male) Mid 20s to Mid 40s
A mysterious, confident, and resourceful man who seems to have been a mercenary soldier in Africa. Lombard is far bolder and more cunning than most of the other characters. Upper class British or cockney dialect.

William Henry Blore (Male/Female) Early 30s to Mid 50s
A former police inspector. Blore is a well-built man whose experience often inspires others to look to him for advice. He acts boldly and frequently takes initiative, but he also makes frequent blunders. He constantly suspects the wrong person, and his boldness often verges on foolhardiness.

General Mackenzie (Male/Female) Mid 40s to 60s
The oldest guest. A once general in World War I. MacKenzie holds strong devotion and convictions to his wife and decisions that were made during their time together.

Emily Brent (Female) Late 30s to 60s
A ruthlessly religious woman who reads her Bible every day. Unlike the other characters, Emily Brent feels convinced of her own righteousness and also of everyone else’s sinfulness.

Dr. Edward George Armstrong (Male/Female) 30s-50s
A gullible, slightly timid but successful doctor. Armstrong often draws the suspicion of the other guests because of his medical knowledge. He has spent his whole life pursuing respectability and public success, and is unable to see beneath people’s exteriors.