And Then There Were None Cast Announcement

Cast announcements and more for this HCCT production. 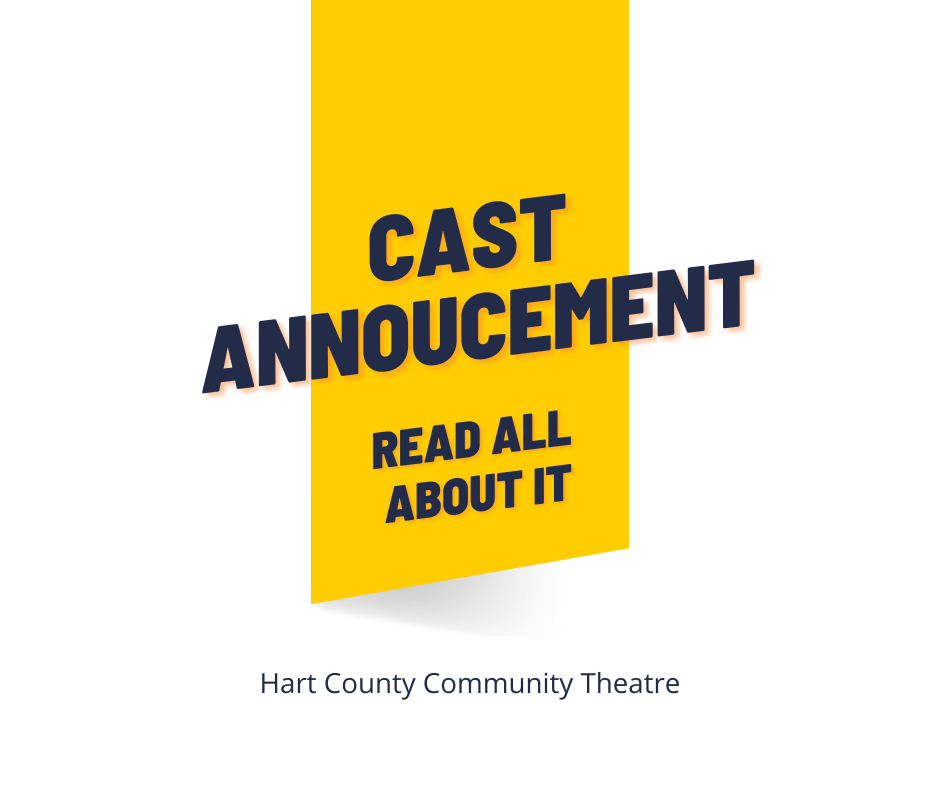 Thank you to all who came out for the auditions and callbacks for Hart County Community Theatre’s Season 43 production of And Then There Were None by Agatha Christie. Here are the roles and their players. Please help HCCT welcome to the stage…

Jeff Blanton (Rogers) – This is Jeff’s second appearance with HCCT. He appeared in Safe At Home in 2019. He has appeared in several stage productions in another community theater group as well as appearing in 18 TV shows and 6 movie productions as background and primary roles. His love for Theater began when he was in high school. He would like to thank his wife for surviving without him and his fellow thespian friends for putting up with him during rehearsal and performances.

Rickey Eberhardt (Philip Lombard) – Rickey is a native of Hart County and has been a part of the HCCT family since the age of 8. He has played Percy in The Miracle Worker and Clifford in Deathtrap. The stage is not only a fun hobby for him, but a means of self expression. Taking a walk in another person’s shoes is an escape from the rut that is adulting. He is also a member of the Hart County Community Chorus and would like to invite others to find themselves a place in the beat of Hartwell. He’d like to give a big shout out to Bradley Sullivan, the real MVP!

Noah Blackston (Anthony Marston) – Noah has an impressive resume of stage work, going all the way back to eight years old when he played the title role of Oliver in their Elbert Theatre mainstage production. Since then, he has performed in more than 13 other productions at the Elbert Theatre. He has also recently spent some time at the Hart County Community Theatre working in the production Mr. Long Said Nothing, a play which his father wrote. Noah recently competed with the Elbert County High School One Act team with this same production and he was awarded Best Actor for the role of Mr. Long. When Noah is not on stage he is usually in his room writing and composing music or playing his guitars.

David Seagraves (Fred Narracott) – David is a resident of Hartwell and currently serves as The Director of Operations for the Hart County Charter System. He spent his career in the field of Healthcare Administration and Finance. He is a member of the Hartwell Kiwanis Club and serves as Club Treasurer. He enjoys visiting and traveling with family members. He is an avid cyclist, enjoying both road and mountain biking. “And Then There Were None” is essentially his first play experience. He is excited to have this opportunity to work with the HCCT in this small role!

Cindi Dotson (Vera Claythorne) – Cindi Dotson is thrilled to be playing Vera Claythorne in her first production at HCCT. Although she has been part of several productions in high school and college, it’s been 7 years since she’s seen the stage.  It’s only fitting her first show back should be written by one of her favorite authors, Agatha Christie. Cindi loves working with children as a School Counselor at North Hart Elementary School, and in her free time, enjoys cuddling with her cats and traveling to new places with her husband, Drew. Cindi would like to remind you to take deep breaths as things might get a little frightening!

Jeffery Hearn (Justice Wargrave) – Jeffery is from Whitesburg, GA who has worked as a theatre tech for Midnight Productions Inc in Newtown, PA. He has been seen doing design for every level of productions through 13 Stories Haunted House, Cinema Greens while doing prop fabrications for The Walking Dead. This is his 4th production involvement here at HCCT. Previously working on Mr. Long Said Nothing doing lighting, set creation for The Secret Garden and Harvey’s Twisted Birthday Party Haunted House. Jeffery also designed lights, sound and set for this production.

Bradley Blake Sullivan (Blore) – Bradley is a new Hartwell resident from out of state. He has 2 nephews, 2 nieces, and a dog (Oddie) that he loves to spend his free time with. This will be his first on stage theatrical performance having performed in Show Choir, Band, and being behind the stage in High School. His passions include cooking, baking, bartending, gaming, and being with his loved ones. He wants to thank Rickey for believing in him, Sonya (Mother) and Will (Father) for never leaving his side, and Amanda for always supporting him.

Angela Cobb (Emily Brent) – Angela is a former high School theater kid with roles such as Benjamin in ‘Joseph and the Amazing Technicolor Dreamcoat‘, Norma in ‘Flowers for Algernon‘, soldier/ensemble in ‘Pippin‘, and Robert in ‘The Martian Chronicles‘. Angela and her family moved to Hartwell in October of 2021 and has been involved with the HCCT since she got here. After a successful run of The Secret Garden in the spring of 2022 and a short break for the summer, Angela has been ready to get back on the stage again. She is excited to embrace the challenge of portraying a character so opposite of her natural personality as she plays Miss Emily Brent. Angela wishes to say thank you to her former director, Lani Sessoms and to her current directors, Lizz Murphy and Sarah Martell, for showing their faith in her abilities and for casting her in this wonderful role in the show.

Scott Clay (General MacKenzie) – Scott is excited to be a part of his third production here at HCCT. Scott was previously seen on stage in Secret Garden as Ben Weatherstaff and in the original Mr. Long Said Nothing as Bill. He has always liked making people laugh and taking on a role where it does the opposite is a challenge he is excited to take on. He has always loved being on stage with previous experience as a drummer in the band Trace of Silence traveling and opening for bands like 3 Doors Down, Powerman 5000, and Flaw. As a native of Atlanta and later of Hartwell, he is excited to be a part of this community theatre.

Renea Minish (Mrs. Rogers) – Renea is thrilled to be appearing in her premiere role with HCCT. She began her journey as a model which led to her love and pursuit of makeup artistry. She put her skills to work as a hair/makeup artist in the news/television industry, traveling to major events and working with celebrities to create “on air” appearances. She is excited to continue her love for artistry and creativity through acting. She’d like to thank her husband and mom for their encouragement to follow her dreams and to her friend Sarah for her support.

Keira DeGrave (Crew) – Keira is a student at Hart County Middle School. She has appeared in previous HCCT productions, including Peter Pan Jr and Harvey’s Twisted Birthday Party, Secret Garden (Lilas) and Mr. Long Said Nothing (Young Wynni). When she is not on stage she enjoys music, anime, video games, making friends, and hoodies. She wants to give thanks to her family and friends for watching the plays she’s been in. She also would like to mention how much she likes to be a ghost.

About the Production Team

Lizz loves spending her free time diving into her passion of theatre and productions. Some of her favorite moments are spent in the theatre, with roles like DooWop Girl in Little Shop of Horrors, Ensemble in Les Misérables and West Side Story, Titania in Midsummer Night’s Dream to Mother Abbess in Sound of Music, to name a few. Recently she was seen in the original production here at HCCT of Mr. Long Said Nothing as Wynni. She has credit from films like Demon’s Rook and Vampire Diaries(extra). She attended Kennesaw State University for theatre and has since kept a hand in a form of entertainment, acting and managing and directing a haunted house for 16 years. She’d like to thank HCCT for giving her the opportunity to have her first directorial experience on a stage. She would like to dedicate this show to her children and the very cast and crew who have worked so hard the past 6 weeks to create such a wonderful experience, really she couldn’t do this without all of you.

This is Sarah’s third production that she is lucky to be part of at HCCT, Sarah is forever grateful to Lizz for having faith in her to take on the Assistant Director role and is busy learning all she can! Sarah would like to thank HCCT for giving her a theatre home in Hartwell and allowing her sometimes crazy promotion ideas to go forward. And finally a huge thank you to her husband Jim who has been extremely understanding with the long hours spent at the theatre to create something special for the audience and cast.

Lani Sessoms has been involved in the Dramatic Arts, in multiple capacities, for over thirty years. She began in her teens as a costumer, participating in regional and national contests, earning her title of Master Costumer before she was twenty. She then apprenticed with an armorer and began working at Renaissance Festivals, both as a craftsman and a performer. Lani also served as the Costume Director for many productions, and her work has been twice nominated for MAT awards.

Madison has helped with previous productions before such as Wanda’s Visit, Charlie and the Chocolate Factory (2018), Maddi: A Ridiculous Obsession, Secret Garden earlier this year, and the 2020/21 Haunted House. She is extremely grateful for the opportunity to step up as stage manager for the first time and she hopes that the knowledge she gained while working at the theatre will give her the upper hand as she pursues her dream of working in the film industry.